What is solar power generation?

Solar power generation exploits the photovoltaic effect, in which sunlight energy is converted directly into electrical energy by semiconductor devices known as photovoltaic cells. This method, which harvests power from the fully renewable resource of solar energy, promises to slash energy costs and accelerate progress toward the United Nation’s Sustainable Development Goals—and, for these reasons, has grown explosively in recent years.

According to the International Energy Agency (IEA), the total power produced by photovoltaic installations grew at an average annual rate of 24% between 2010 and 2020. Within IEA forecasts predicting trends in global power-generation capacity under various future scenarios, solar energy consistently ranks among the most promising of the various available power sources, and the market for photovoltaics is widely expected to continue growing rapidly in the years to come.

■ The market for photovoltaic systems

Megasolar stations are large-scale operations commonly located near bodies of water or on land formerly used to grow crops; the power they generate is not used on-site, but is transmitted elsewhere through the power grid.

One recent innovation, adopted for both megasolar and dispersed generators, is the use of batteries to store power generated during daylight hours, thus achieving greater flexibility in how and when the power is used.

At present, many countries around the world are expanding solar energy as a strategy for decreasing greenhouse-gas emissions. One consequence is that the energy policies adopted by various nations have become important factors affecting the global photovoltaic market.

Two particularly important examples of such policies are feed-in tariffs (FITs) and conventional government subsidies. FITs attempt to promote growth in renewable energy by offering special treatment to power-plant operators in the form of legally mandated minimal purchase prices for renewable energy, while subsidies directly offset the cost of building and operating plants.

Going forward, policy support for solar power is expected to remain robust in many countries, while investments in megasolar-scale facilities are forecast to continue their recent growth trajectory.

The structure of solar-power generators

Solar power generators comprise photovoltaic elements and other components. The simplest functional unit is the photovoltaic cell (or solar cell). Groups of cells may be combined to form a module. Each module consists of several tens of cells arranged in a planar grid configuration and packaged together with a frame, glass, encapsulants, a backsheet, and a junction box. Two or more modules may be connected in series to yield a string. Two or more strings can be arranged in parallel to form an array.

The power generated by each module is collected by a junction box installed on the back of the module and delivered via connectors and cables to the outside world. These junction boxes incorporate bypass diodes that play an important role in avoiding energy losses by routing power flows around cells that may be malfunctioning due to damaged or dirty surfaces. 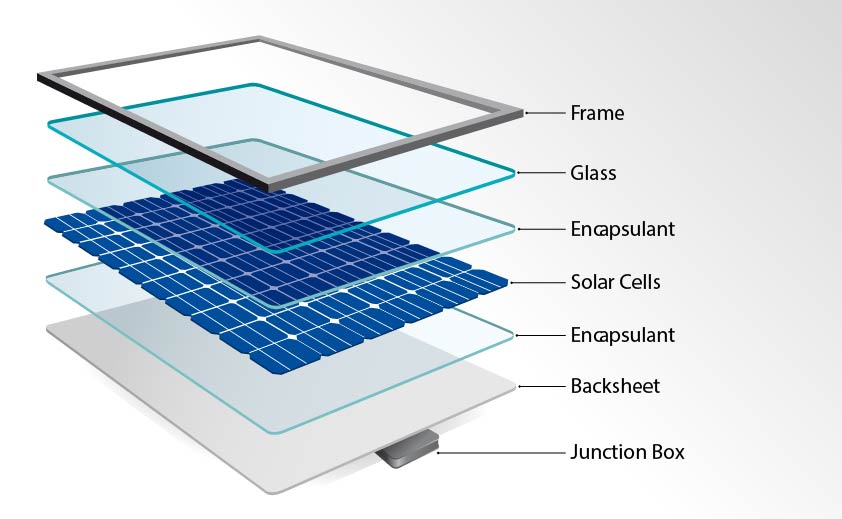 Structure of a typical photovoltaic module.

To ensure the safety and performance of commercial photovoltaic products, photovoltaic modules are tested and certified by third-party certification bodies, such as the internationally recognized UL, TÜV Rheinland or JET in Japan and similar bodies in the world. For a module to receive certification, the materials from which it is fabricated must pass a variety of safety tests.

Photovoltaic generators operate in harsh environments that place stringent demands on their component materials. In particular, generators intended for installation in farm areas, near bodies of water, or on steep mountain grades must withstand severe storms, frigid temperatures, and intense ultraviolet radiation, necessitating materials with excellent weather resistance and cold-impact resistance. Moreover, the 20-year service lifetimes expected for these systems demand materials of extraordinary long term property, while the safe generation and transmission of electric power imposes constraints on heat resistance, flame retardance, tracking resistance, among others. All of these material-property requirements are reflected in the testing methods—and in the numerical values of performance criteria—used by certification bodies like UL and TÜV Rheinland, and the best way to ensure compliance for photovoltaic systems is to use only materials that have been certified to satisfy all of these rigorous specifications.

Asahi Kasei’s XYRON™ materials are polymer alloys combining polyphenylene ether (PPE) with other resins. The XYRON™ family, which Asahi Kasei has been producing since 1979, boasts an extensive track record—occupying a key role in the history of engineering plastics—and today encompasses a full-fledged line-up of polymer alloys.

XYRON™ modified PPE resins offer excellent weather resistance and are suitable for use in the harsh environments in which solar-power generators operate.

To demonstrate this, Asahi Kasei conducted exposure tests designed to mimic the operating environment faced by components of solar-power generators. In these tests, samples of various functional materials were installed at an outdoor test site in Okinawa, Japan, and held there for a period of 10 years beginning in 2011. Post-exposure tests confirmed that XYRON™ resins exhibited no catastrophic decrease in strength. 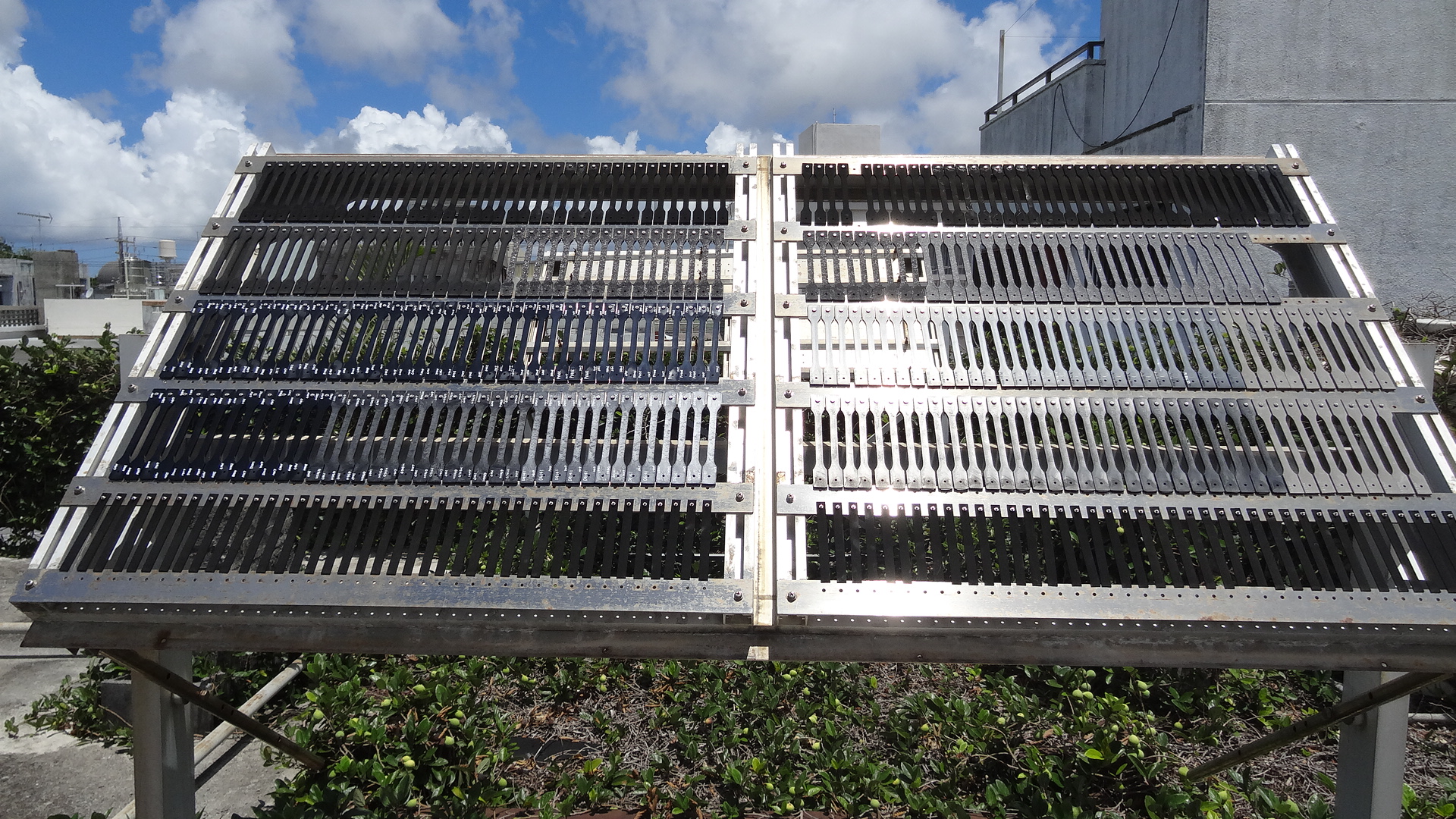 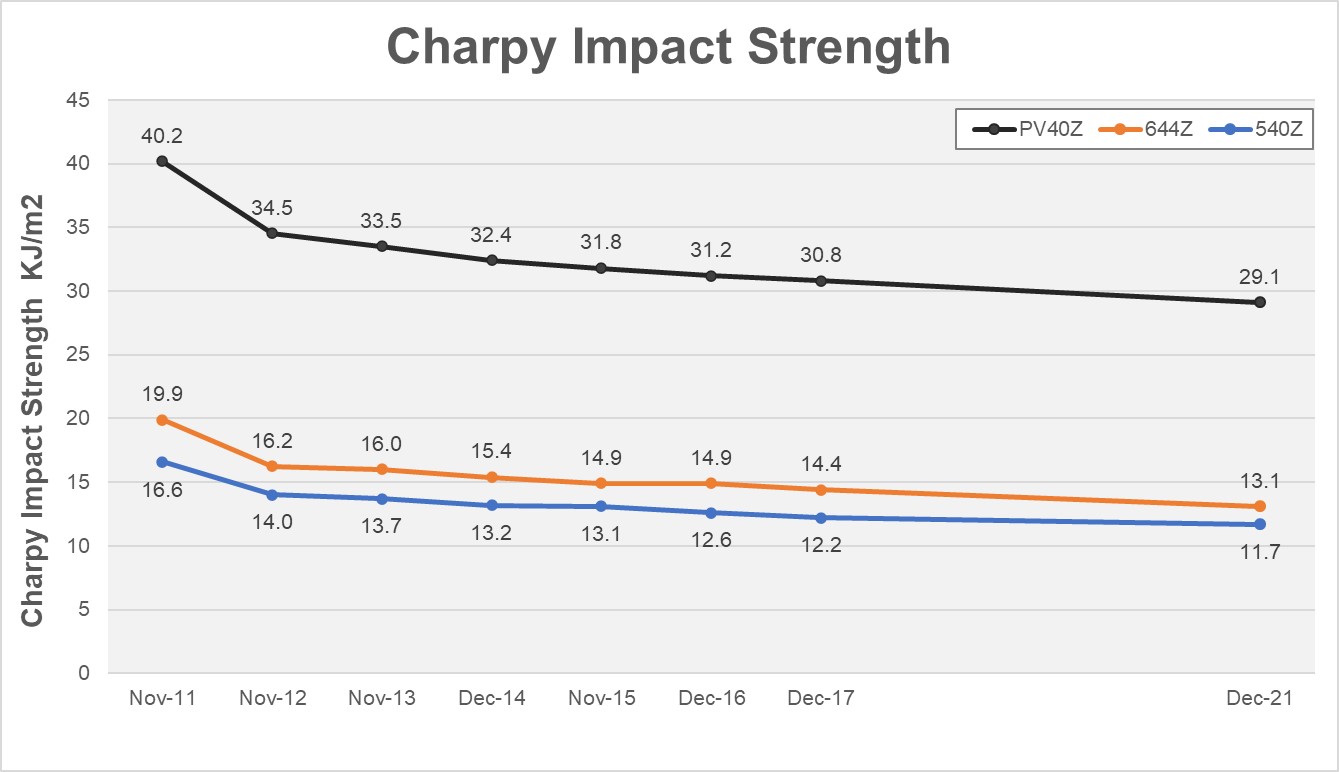 XYRON™ modified PPE resins also feature excellent ammonia resistance property. The importance of this property stems from the fact that solar panels are often installed on land previously used as farmland or pasture, and must therefore be capable of operating in contact with ammonia originating from livestock. Tests conducted by Asahi Kasei confirmed that XYRON™ materials exhibit essentially no degradation after immersion in an aqueous solution of ammonia, and these materials can thus be used for solar-power generators installed on farmland and other places. 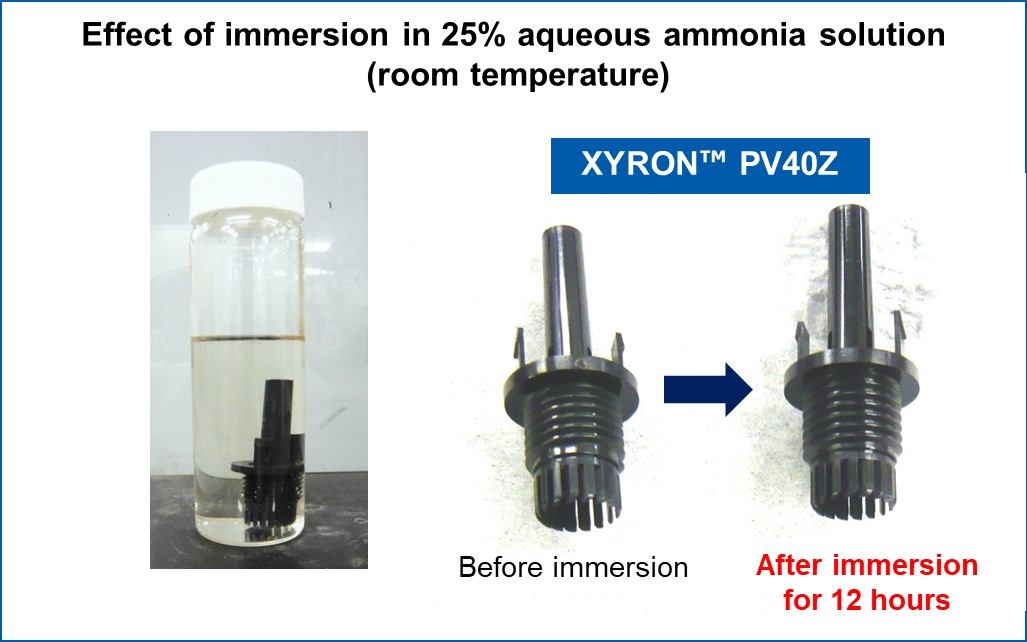 Test results: A product component formed from XYRON™ modified PPE resins, before and after immersion in aqueous ammonia solution. 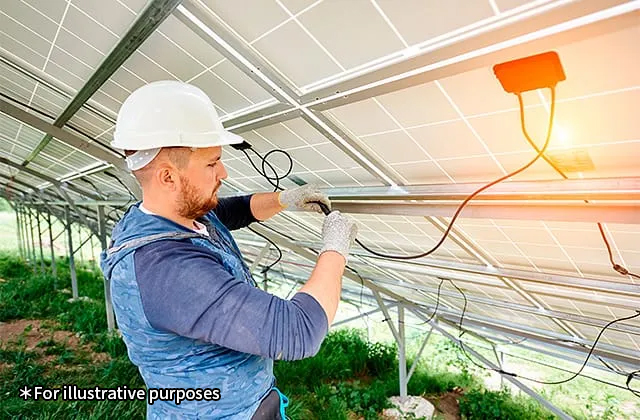 For connectors in solar-power generators, Asahi Kasei recommends the PV40Z grade of our XYRON™ modified PPE resins. This material offers a good balance of tracking resistance and cold-impact resistance and is well-suited to the design of miniature high-voltage connectors.

In addition, this material offers high hydrolysis resistance, high ammonia resistance, and no dramatic degradation in physical properties even when used in high-temperature, high-humidity environments.

The outstanding electrical properties and tracking resistance of XYRON™ resin have also earned this material a role in high-voltage solar-power generation systems. The use of plastics with outstanding tracking resistance for high-voltage systems allows miniaturization of products and helps to reduce resource usage. The low specific gravity of these materials also reduces CO2 emissions during shipping.

For these reasons, Asahi Kasei has solicited advice from third-party institutions regarding viewpoints and computation methods to assess environmental impact from the standpoint of life-cycle analysis (LCA), and has received internal certification as environmental contribution products. XYRON™ modified PPE resins have also been used for inverters and other similar components in product development.

LEONA™ is a family of polyamide resin materials (PA66, nylon resins) manufactured and sold by Asahi Kasei. A unique feature of LEONA™ materials is that the entirety of their manufacturing process—from raw materials to finished products and every stage in between—takes place in Asia.

When used in combination with XYRON™ products, the excellent heat resistance and high screw-torque property of LEONA™ resins allows the design of components offering higher stability than is possible with typical materials.

For moisture- and dust-resistant nuts at junctions between cables and connectors, Asahi Kasei recommends two grades of our LEONA™ polyamide resins: the FR370 grade, a non-halogen flame-retardant (V0) material that is highly formable, and the FG171 grade, a flame-retardant material reinforced with glass fibers for high strength.

The excellent heat resistance of these materials has also been exploited for use in other components, such as the base plates used as mounting platforms or base plate for diodes that serve as heat sources within junction boxes.


We would like to talk to you about Asahi Kasei’s resin materials for solar-power generators. Please contact us to ask any questions, discuss any concerns, and request samples. 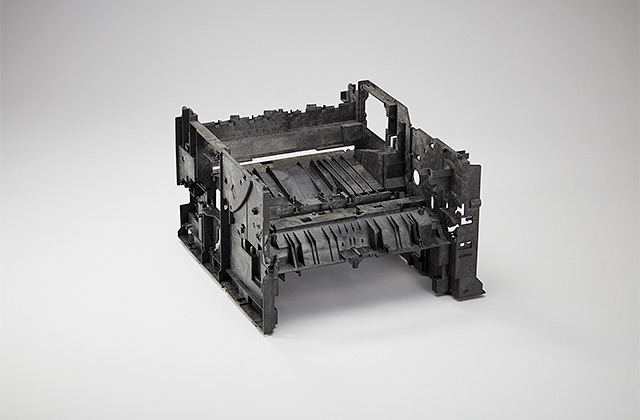 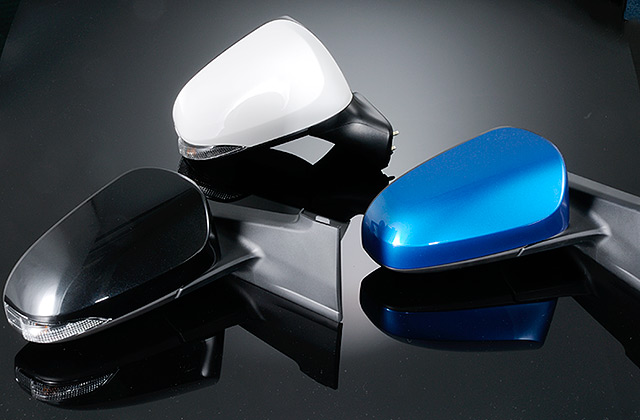 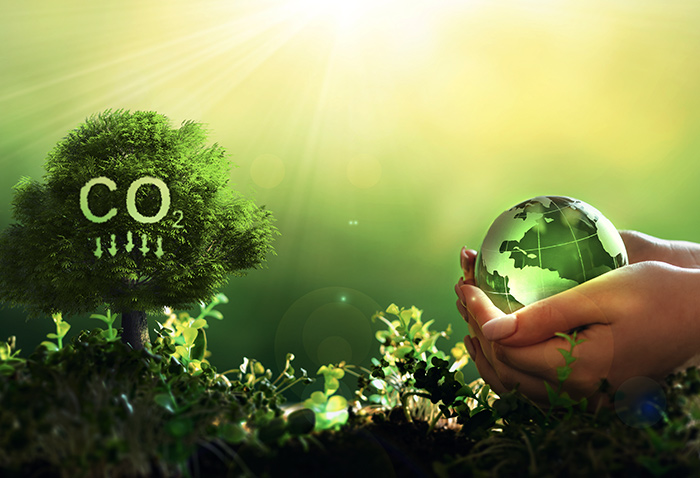 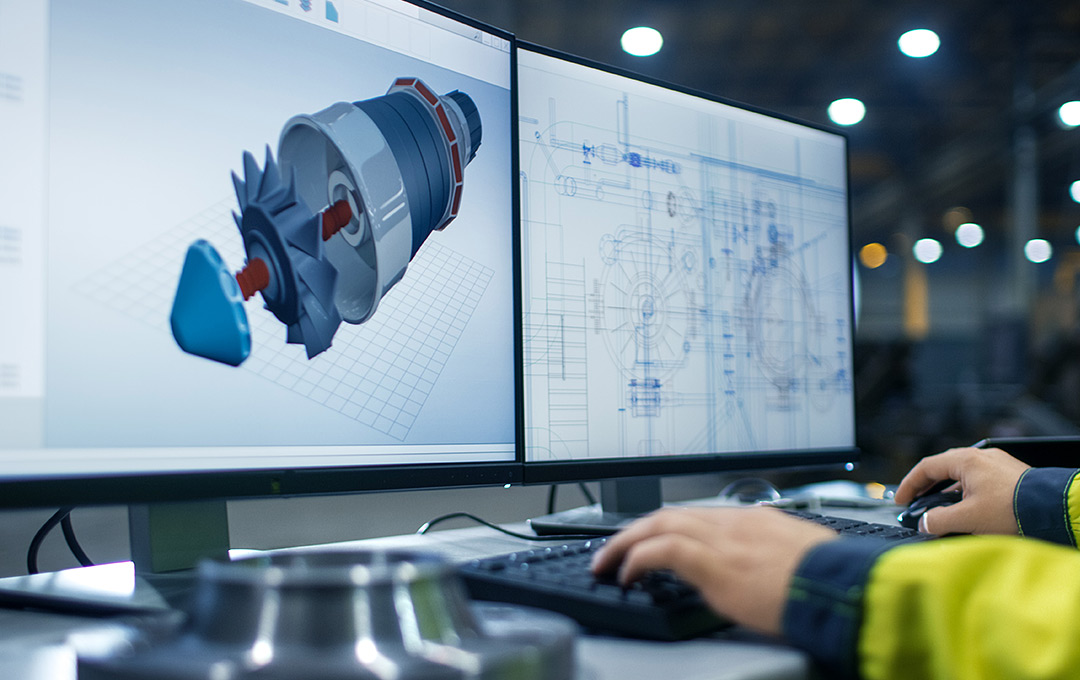 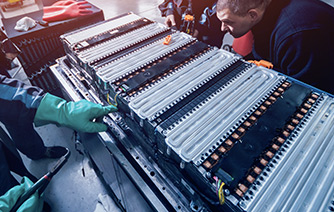 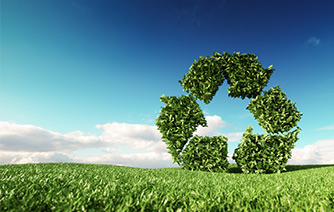